This game was created for the Game Maker's Toolkit Game Jam for 2019. The theme of the jam was only one. So I created a game in the style of a platformer where the player can only jump once per level.

The game was created with 48 hours over the weekend starting on the 8th of August in 2019.

Hay That game was fun. Loved the are style and the whole mood the music gives well executed on the theme. I also agree with @VeXJL on the critique. but i like what you did here keep it up man

Thanks for playing. I'm glad you enjoyed it.

Cool idea, but the levels often come down to trial and error as it's not clear what certain objects do.

Good job! You created the core mechanic from the theme and built the gameplay around it, which is not something everyone has managed to do.

Really great idea for this year's Game Jam! It's pretty good, but I feel it needs more visual clarity. For example, I don't really like how the game (for the first two levels) entice you to go into the pits by putting in a chest or a character to teach you to use r to reset. It's not even a game-changing mechanic, so I don't think it needs to be "taught" in the first place. Putting a reset button (with hotkey r) in the corner is a simple yet effective way of showing the mechanic, and there's really not much to it. There's also the rotational buttons and the portals. For the rotational buttons, there really needs to be something, maybe different coloured blocks, to show the player which blocks are rotated in the first place. As for the portals, there needs to be some consistency as to which portal goes to where. The last level featured three yellow portals and it just needs to show that the yellow portals on the left both lead to the one in the air (another thing is about that level is that if you hold left when you start, you die on the spikes near the red portal, and I think that it needs to be tweaked a bit to avoid that). Other than that, I really dig the idea of a platformer using only one jump and I like how it's implemented in this game.

Thanks for playing and giving a detailed critique. I pretty much agree with everything you said. Especially coloring the rotating platforms to make it obvious what will move.

If this game were to ever be brought to to a production level, it would need a complete overhaul. Detailed feedback like this would help point the game in the right direction.

great game! Nailed the concept of the jam.  It's a platform puzzler. Who knew that you jumping was such a crutch!

This game is challenging and fun!

Super enjoyable and fun to play, nice music too

Great work!  Clever and  fun.  Hope you get to add more levels.

Honestly I'm into it. I love it. I really enjoy how you built onto the concept and expanded it even in such a short series of events.

I enjoyed the game play and thought it was fun but couldn't you have tweaked the downloadable art just a little?

Would it defeat the point of this jam if you add a "you can jump one extra time"-power-up? Like with the yellow arrows in the Jumper(Ogmo) game series. Right now, I believe that the game is to easy. Both to succeed and to fail. I would like to fail further in a challenging level then fail a simple jump in a short level. I need some frustration to feel accomplished finishing a good/hard level.

Tl:dr, give me a challenge :D

A bit short, also make it more clear that you can jump in midair. With more polish could be good.

This could be a really fun puzzle game if you added more levels and some polish. Keep up the good work!

Very cool concept! Only wish you had created more levels.

Thanks! I'm still making levels. Let's see how much can be finished before the deadline.

I think I've nearly reached my limit for levels. I might get one more done, though.

Interesting idea and really nice use of its consequences 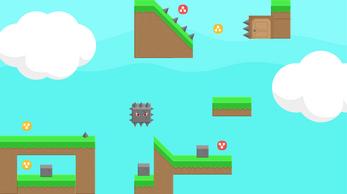 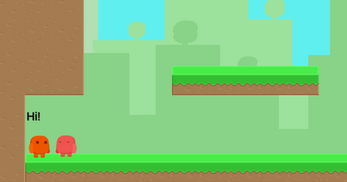 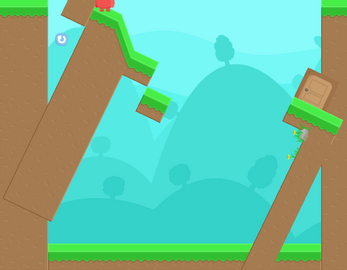